Hotel and Facilities / Corner of Market and San Carlos St.

I was going to suggest shutting down a portion of the street to cars to make it like a farmers market setting, but that would take away bus and light rail. Or narrow San Carlos St into 1 lane and use the closed lane into a spill-over pedestrian walking lane.
#2

May 29, 2017, 08:46:30 PM
I've been going to anime conventions for a very long time, and FanimeCon 18 straight. The policy of dedicated entrance and exit gates were the best thing to happen at FanimeCon since the move to San Jose from Santa Clara. It drastically cut down on the traffic on the main convention floor (although packed) by only allowing paid attendants there, and allowed access to rooms through any door. From my point of view, F17 was the best run and smoothest run Fanime in a long time, if not ever.

My biggest gripe which it really hasn't anything to do with FanimeCon, is the atmosphere around the convention center between hotels, garages, and the streets in general. The homeless and panhandling crowd has gotten bad and dangerous (and even the hot dog vendors have been a little too much...). I avoid the Santa Clara Street area at all times, and the San Carlos St area near Iguanas/La Vic has been getting bad too. Druggies, homeless, hecklers, harassers, etc... has made San Jose an unwelcoming place, especially at night. It has become an eyesore just walking from Marriott to Fairmont, and that's just across the street.


And speaking of 'across the street', any way to improve crossing the street at Market/San Carlos (Marriott corner)?

Happy Things in the Happy Universe / Warriors of FanimeCon

Ideas and Suggestions / More things to do on Thursday and Friday

May 27, 2015, 10:30:53 PM
I realize that it may be more money, but are there ways to have events, panels, Stage 0, etc. on Thursday morning/afternoon and Friday morning? After we got our badges, it felt like a long time before anything else opened, aside from the gaming room. I think Thursday and Friday mornings are perfect for industry panels, and every time after are fan panels.
#5

May 26, 2015, 04:49:56 PM
I'd like to say how well this year's event was held and to say thanks to all staff for another year. I don't have any complaints as far as staffing or venue related issues. I can't speak for people like dealers, swap meeters, and artist alleyers, but the event itself seemed like to be pulled off without any major problems.

Other than issues before the con, like housing, website updates, guests, artist alley registration, etc., the con itself ran as smooth as I ever seen before; and I've been to 16 straight Fanimes.

I hope that Fanime can continue to grow into an even bigger gathering of fans and continue to be well-run like this year.
#6

Meetings, Gatherings, and Get Togethers / Date...?

Never mind what I posted earlier...I'll just have fun at Fanime.
#7

May 26, 2014, 10:28:34 PM
I would like to congratulate the staff, volunteers, city/CC workers, and local businesses on one of the best and most enjoyable FanimeCons ever.

Thank you for the new registration system and I hope it becomes the standard for every convention from now on.

Thank you hotel and convention center staff for putting up with the usual FanimeCon mess. But also thank you for embracing the event as a welcoming San Jose tradition.

While there may be some issues and complaints, they seem far and few in between; especially that there has been way more praise than complaints.
#8

Happy Things in the Happy Universe / FanimeCon the video game

>>>>>>Just tell us a little (or a lot) about yourself. Whatever you are comfortable sharing to the Fanime forums community.<<<<<<<<


My fan name is Otakuya and my real name is Daniel. I also go by Christian as it's my middle name and that's what they call me at work. I am 28 years old. Born and raised in San Jose, CA. I graduated San Jose State in 2008 with a degree in Recreation and minor in Kinesiology. I currently am attending New Charter University (online) for an MBA in Business Management (it's not going too well, but I'm working on it). I work at a golf store as of now as a golf equipment sales rep and I aspire to work for a professional sports team someday soon. Real soon.

I've been attending FanimeCon since 2000 and been a fan of anime since 1998. I've been interested in cosplay, gaming, and game shows at every convention I attend. I've been away from anime watching for a while now, but recently trying to get back into it. I've been more into gaming culture and "let's plays". My favorite anime include classics like Slayers, Pokemon, Ranma 1/2, Melancholy of Haruhi Suzumiya, Initial D, and Hayate no Gotoku. Favorite games (all time) include Daytona USA, Initial D Arcade Stage, DDR, Wangan Midnight Maximum Tune, NBA Jam Tournament Edition, Mario Party, Para Para Paradise, Gran Turismo 4, Street Fighter 3 Third Strike, Tekken Tag Tournament 2, and Sonic 3 & Knuckles (among those I can name right now). My cosplay highlights include Sandbag from Super Smash Bros., Shy Guy from Super Mario, and The Stig from Top Gear.

I am also into cars and sports. My personal car is a Toyota Matrix which I named "Peppy" because the gas and brakes are very sensitive. My dream cars are a Lexus LF-A, Nissan GT-R, Subaru Impreza WRX STi wagon, and a 1985 Chevrolet Corvette. I also follow a lot of sports; San Jose Sharks, Golden State Warriors, Sacramento Kings, SF Giants, SF 49ers, Oakland A's, L.A. Clippers, Chelsea FC, Houston Rockets, Joe Gibbs Racing (NASCAR), and Red Bull Racing (F1) are all my favorite sports/racing teams I follow. I am also really into fantasy sports. I play a little bit of sports for recreation and exercise, but I play golf most often with co-workers and boss.

Things in the Universe / List every convention you attended/will attend

March 23, 2014, 08:13:02 PM
List all conventions you've ever attended, whether anime, gaming, gaming tournaments, tech, and fantasy related; plus those you plan to go to. I've been attending these things for more than 10 years now...

However, I want to know what anime is "in" nowadays and not get too lost in modern anime trends; like characters that are being cosplayed, plushies and posters in the dealers room and artist's alley, etc. What's a good starting point and what's going to be "in"? I have a sense that Crunchyroll shows 'old' stuff and not the 'trend'.
#15

I love that fact that AA was at the South Hall (the Big Blue Tent), because it forces crowds to spread out and not have everyone stay at the CC itself. I'm hopeful that Fanime continues to use South Hall (not just AA but other events too) even when the new convention center expansion opens to spread everyone out.

And every year, despite the 'feedback' this year, I like to thank staff and volunteers for sacrificing their time and effort to make FanimeCon happen in the first place.
#18

May 27, 2013, 05:49:03 PM
I realized that there was not a place to submit our information regarding staff contacting us back or the raffle. I sent my feedback with no email address or phone number (I included my forum name in the feedback). How will staff contact us if they need to?
#19

May 19, 2013, 04:14:00 PM
I'm not devAtelier or anything like that, but I discovered and just downloaded the ("official") FanimeCon app from the Google Play store and I'm excited to see this being applied. Thanks to Devatelier.

May 05, 2013, 09:42:44 PM
I was looking at Discover Silicon Valley and I found other things to do in San Jose during Fanime/Memorial Day weekend. I'm not saying you should go to these rather than Fanime, but just giving an option to travelers and first timers to the area. Plus, Fanime is 5 days long, rather than a one day event.


Sake San Jose Festival on May 23rd at San Jose Japantown
www.sakesanjose.com
[Note: it's on Day 0 of Fanime]

Every post you make, pick 1 fictional character (from anywhere) or real person to be on your "team". Doesn't matter for what game, sport, or journey. Maybe you're looking for power, speed, attitude, dexterity (zing!), ability to score, ability to "score", whatever. Draft a team that'll be on your side. You can't pick a character that's already picked. I'll compile a roster as we go on.


With the first pick of the Fanime Boards Fantasy Draft, I select James Bond.

Happy Things in the Happy Universe / Cheer me up, please

April 19, 2013, 10:59:57 PM
I am sure it is a changing culture, but I would like for those who remember to think back to the late 1990s and early 2000s in the world of anime/manga fandom. Back then, anime clubs were 'underground' in libraries and schools, and anime were distributed by sharing tapes, laserdiscs, and club screenings. Anime in America seemed unknownsgt (is that a word?) to the general public.

I'd like to know where you think the future of anime is headed, and that how events like FanimeCon are evolving.
#24

April 17, 2013, 02:17:50 PM
FanimeCon made it to the (local) Yahoo front page news for an article saying that San Jose is the 9th biggest nerdiest/geekiest city in America and we're proud of it; with events like Fanime, FurCon, and BigWow. And not to mention the Zelda concert last year. 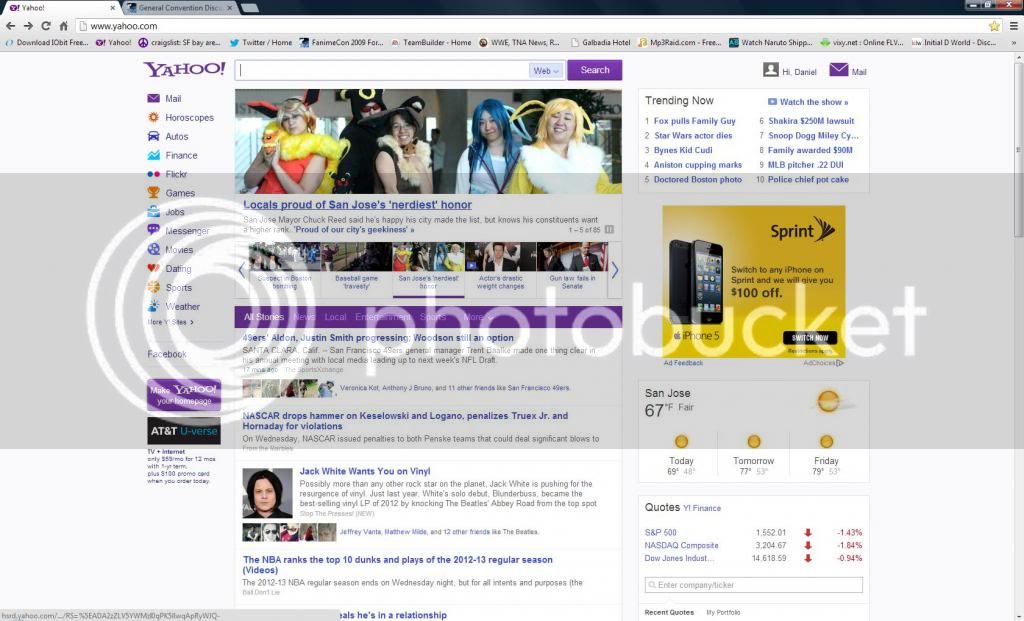 January 16, 2013, 02:01:33 PM
I'm wondering if there is going to be a live streaming channel for Fanime events, like Stage Zero, game tournaments, and cosplay spectacular? It'll be cool for those that can't make it to the con. Probably through Twitch and Justin
Pages1 2 3 4